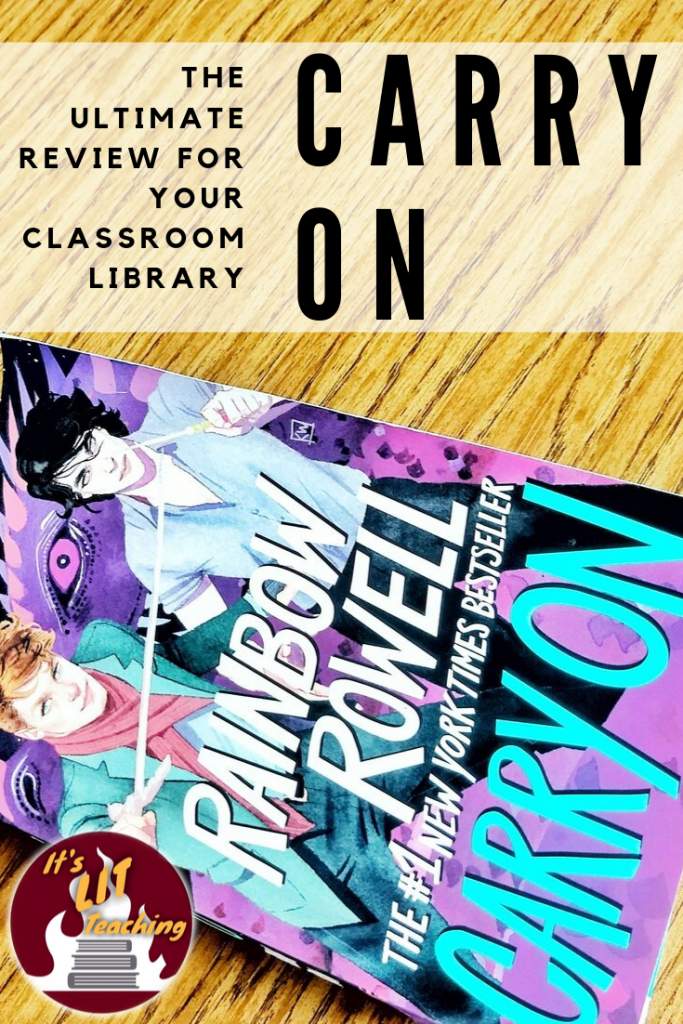 Are you looking for a sharp, witty read for your high school classroom library? While I found Carry On as part of a BarnesandNoble.com sale, my students made me read it. They saw it on my desk and were adamant: I HAD to read it. Like now. And they were right! Carry On by Rainbow Rowell is a hilarious romp that is equal parts romance, adventure, and mystery.

What Drew Me To Carry On?

I knew nothing about this novel when I purchased it. Later, my students explained its bizarre context. Carry On is based on a fanfiction series within Rowell’s other novel Fangirl.

That’s right. Carry On is based on a fictional fanfiction within another of Rowell’s (fictional) novels. (Side note: Can you imagine having a creative imagination that complex? Jealous!)

That alone is a pretty fun premise. I have to admit that I haven’t yet read Fangirl. And that’s ok. Despite being a spin-off, Carry On is its own story with its own universe. You need not have reader Rowell’s other work to enjoy it.

Knowing nothing about Carry On’s background, it still caught my attention. The main character Simon Snow is “The Chosen One.” His parents are dead, he attends a school of magic, and he alone can conquer the greatest threat magic has ever faced.

In the beginning, the novel feels like a Harry Potter satire. Every character and scene seem to be poking fun at the bestselling series. And it is fun. The jokes are tongue-in-cheek and beyond clever.

The characters frequently make offhanded references to past adventures while giving absolutely no context. Simon’s longtime girlfriend voices her dissatisfaction at being perpetually dragged into mysteries not meant for children. Even Simon’s rival acknowledges the fact that Simon will one day end him.

Rowell’s first impression for me was purely comedic. Because the original inspiration was fanfiction (granted, it was original fanfiction in a fictional book), it feels like fanfiction. I felt some guilty pleasure reading it.

Yet, readers can’t ignore Rowell’s sophisticated writing. Her characters are fully-formed. They are diverse without diversity being their sole character trait. Simon, Baz, Penelope, and Agatha will remind you either of someone from your life or someone from a beloved childhood TV show.

Rowell even creates the rules of this magical world with humor in mind. Magic depends on the significance of words in a language. Sayings and phrases that people repeat and believe in (like nursery rhymes and common idioms) carry a great amount of power.

But that also means that lines from catchy pop songs can also become spells.

Imagine a wizard casting a serious spell to stop evil using a line from a Lady Gaga song. That’s pretty much what all of Carry On feels like.

Rowell is able to create these whimsical scenes while still driving home the idea that language is magical and powerful.

Your students will also connect to the characters. Rowell includes a variety of characters from different ethnic (including vampire!) and socio-economic backgrounds. There is a homosexual romance throughout that feels natural, not like Rowell inserted it to be “edgy” or controversial.

This is not necessarily a seat-gripping adventure, but the central mystery is interesting and complex enough to keep you reading.

Who’s the Ideal Reader for Carry On?

I’m not sure how else to describe the writing of Carry On, except to say that it’s smart. Because of this, I really recommend it for students with strong critical thinking skills.

The humor is sophisticated. It draws on tropes of the fantasy genre. There are subtle references to other novels. I believe that being well-read will make Carry On more enjoyable for the reader.

The magic and many of the jokes are wordplay, which might go over the heads of students who really struggle or ELLs who are still working on common idioms.

Carry On readers should be students who aren’t easily overwhelmed (it’s long). They should be somewhat familiar with the fantasy genre, so they can appreciate Rowell’s mocking of it.

Basically, if you have a (probably teenage girl) in class who spends her time writing fanfiction, they’re the target market for this novel. I think young men who love satire can also really appreciate the nuances of this novel.

It’s silly and romantic. It’s original and derivative. Carry On by Rainbow Rowell feels like a contradiction. Match it with students who appreciate the weird.

If you need to quickly grab a title that will appeal to a reader looking for some LGBTQ characters, this could be a great one to try as well. This is also the book to hand to that student who is re-reading the Harry Potter novels for the hundredth time.

I mostly work with high school readers who are far below grade level in reading, so my knowledge of the middle grades is scant. I feel, however, that this novel could also be a great middle school read for advanced students. The Lexile is not the intimidating part of this book–its the length.

Carry On: The Facts

Setting: The Watford School of magic is set within present-day England.

If you’ve decided that you need Carry On for your classroom, you can order it from Amazon here.

Looking for other titles to add to your classroom library? Simon v. the Homo Sapiens Agenda is another funny and adorable title with an LGBTQ romance. Allegedly and Broken Things are darker, but also have mysteries at the core of their plots.

For even more recommendations, sign up to be on my mailing list. You’ll receive a FREE copy of my must-have titles for your high school classroom library just for signing up! Plus, I’ll send you updates as I discover and review even more titles!