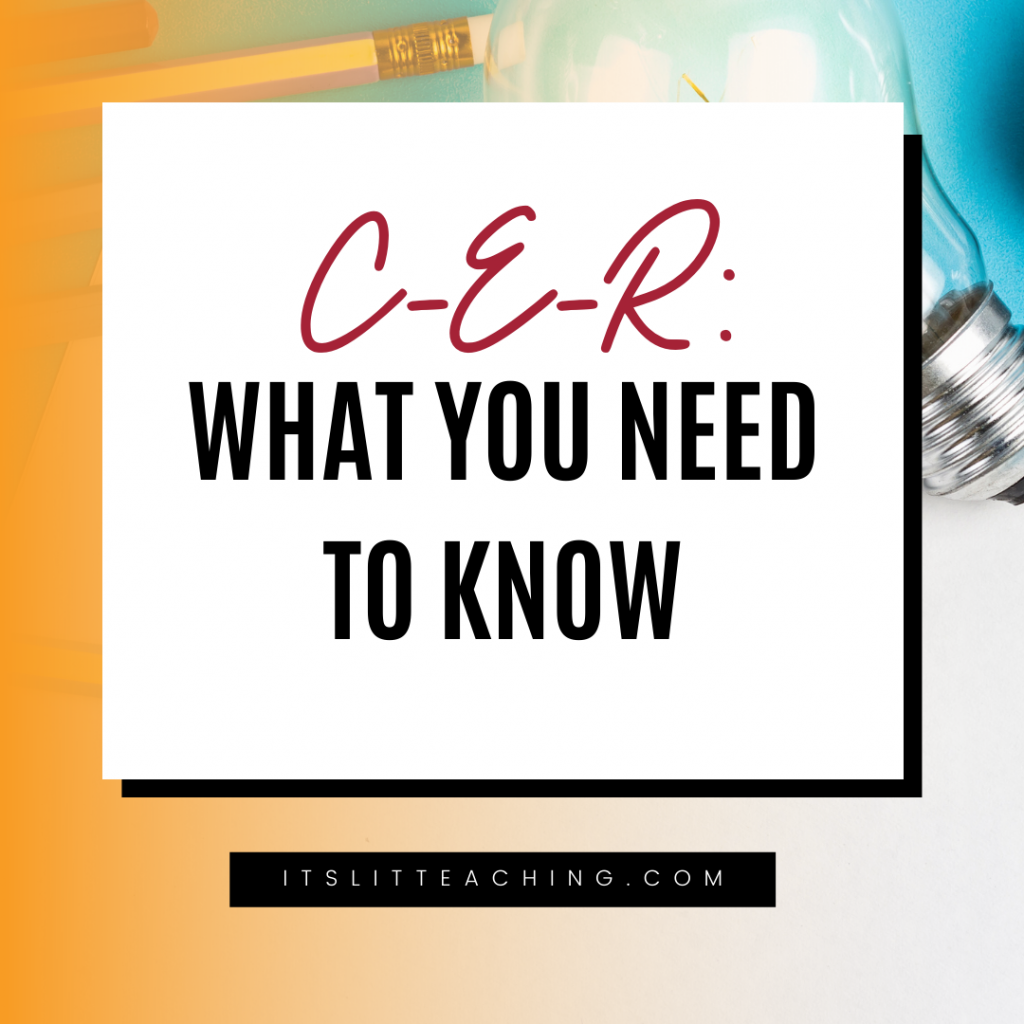 Has an instructional coach or administrator told you to start using a claim, evidence, and reasoning (or C-E-R) framework for writing in your classroom?

Maybe you need to closely adhere to the Common Core State Standards but aren’t quite sure where to begin.

If you’re like me, your whole school may be committing to using a C-E-R language in all classes to build consistency and teacher equity for students.

Regardless, here you are wondering, what the heck is claim, evidence, and reasoning anyway? In this post, I aim to break it down for you.

There are plenty of science examples out there, but that is not my specialty. For this post, I’ll focus on my subject area, high school English, but know that the C-E-R framework can be applied to multiple content areas.

If you’d like to teach the C-E-R writing framework to your students, I have a whole bundle of resources right here.

C-E-R writing is a framework that consists of three parts: Claim, Evidence, and Reasoning. Science classes use it frequently, but it works well in any content area. In fact, my entire school uses it–down to the gym classes!

A C-E-R writing framework works especially well for teachers adhering to the Common Core State Standards. The words “claim”, “evidence”, and “reasoning” are directly from the standards themselves.

Note that these are academic forms of writing. You wouldn’t, for instance, probably use claims, evidence, or reasoning in a creative writing class or with a narrative or poetry unit.

While C-E-R may seem formulaic at first, it does come from a natural flow of solid arguments. Any attempt at persuasion must take a stance, support it with logic, and make a case.

The formulaic nature of C-E-R writing makes it a helpful writing scaffold for students who struggle to organize their ideas or generate them in the first place.

The claim sets the tone for the rest of the writing.

It is the argument, the stance, or the main idea of the writing that is to follow. Some may say that in C-E-R writing, the claim is the most important piece.

For a paragraph, I feel the claim makes a great topic sentence and thus, should be the first sentence. The body of the paragraph then will aim to support the topic sentence (or claim).

In a standard five-paragraph essay, the first introductory paragraph may build to the claim: the thesis. The body paragraphs then will each contain a sub-claim so-to-speak that supports the overarching claim or thesis.

Claims, while logical, should present an arguable stance on a topic.

I often have to remind my students that if they are writing in response to a question, restating the question in the form of a sentence and adding their answer is an easy way to write a claim.

A Claim Example for an English Class

“Friar Laurence is most to blame for Romeo and Juliet’s deaths.”

This claim is strong for multiple reasons. First, it is direct. There’s no question about what the rest of the writing will be about or will be attempting to support. Second, this claim is arguable–not provable–but also logical. The idea can be supported by examples from the text.

A claim is not a fact. Evidence should support it, which we’ll discuss in a moment, but ultimately, it should not be something that can be proven.

The next step in the C-E-R writing framework is evidence.

Evidence is the logic, proof, or support that you have for your claim. I mentioned earlier that your claim, while arguable, should be rooted in logic. Evidence is where you present the logic you used to arrive at your claim.

This can take a variety of forms: research, facts, observations, lab experiments, or even quotes from interviews or authorities.

For literary analysis, evidence should generally be textual in nature.

That is, the evidence should be rooted–if not directly quoted from–in the text. For example, the writer may want to use quotes, paraphrasing, or a summary of events from the text.

I encourage my students to use word-for-word textual evidence quoted and cited from the text directly. This creates evidence with which it is difficult to argue.

An Evidence Example for an English Class

If we continue with the Romeo and Juliet example, we could support our previous claim that Friar Laurence is most to blame for the couple’s death by presenting several pieces of evidence from the play.

Our evidence may then read as follows:

“In the play, Friar Laurence says to Juliet, ‘Take thou this vial, being then in bed/ And this distilled liquor drink thou off;/ …The roses in thy lips and cheeks shall fade/ … And in this borrow’d likeness of shrunk death/ Thou shalt continue two and forty hours,/And then awake as from a pleasant sleep’ (4.1.93-106).”

This is strong evidence because the text proves it. This quote comes directly from Shakespeare; you can’t argue with it.

It is also on-topic. it shows a piece of the play that supports the idea that Friar Laurence is most to blame for Romeo and Juliet’s deaths.

For claim, evidence, and reasoning writing, the strength of the argument depends on its evidence.

In a one paragraph response, I usually recommend that students break down their reasoning into three sentences:

Personally, this is where my students struggle the most. They have a hard time understanding how to explain the evidence or connect it to their claim because it’s obvious to them.

If your students, like mine, struggle with crafting reasoning, I recommend giving them sentence starters like “This shows that…” or “This quote proves that….”

I also go over different ways to approach writing conclusion sentences, as my students often struggle in ending their writing.

(If you’d like help breaking this down for your students, my C-E-R Slideshow covers reasoning–including what to include and three different ways to write a conclusion sentence.)

A Reasoning Example for An English Class

For our Romeo and Juliet example, it may read something like this:

“This quote shows that Friar Laurence is the originator of the plan for the two lovers to fake their deaths. Had he not posed this plan, Romeo could not have mistaken Juliet for dead. Thus, he would never have committed suicide, nor Juliet. As the adult in the situation, Friar Laurence should have acted less rashly and helped the couple find a more suitable solution to their problems.”

This reasoning is strong for several reasons.

First, note the transition in the beginning. It discusses the textual evidence–the quote presented earlier–directly and explains what is happening in the quote.

Next, it walks the reader step-by-step through the writer’s rationale about the evidence that led her to believe the claim. Even if the reader does not agree with the reader’s claim, he or she must concede that the writer has a point.

You may have noticed that in this example, the reasoning tends to be longer than either the claim or the evidence. The length of the reasoning will vary according to the assignment, but I have found that good reasoning does tend to be the bulk of C-E-R writing.

Get Started with Claim, Evidence, and Reasoning Today!

And there you have it! An overview of the C-E-R writing framework. No doubt, you can see how this framework can easily be applied to a myriad of assignments in any content area.

If you need help getting started in using the C-E-R writing framework in your English class, I have a few resources in my Teachers Pay Teachers store that can help you. Check them out! Start with a FREE student guide to claim, evidence, and reasoning!