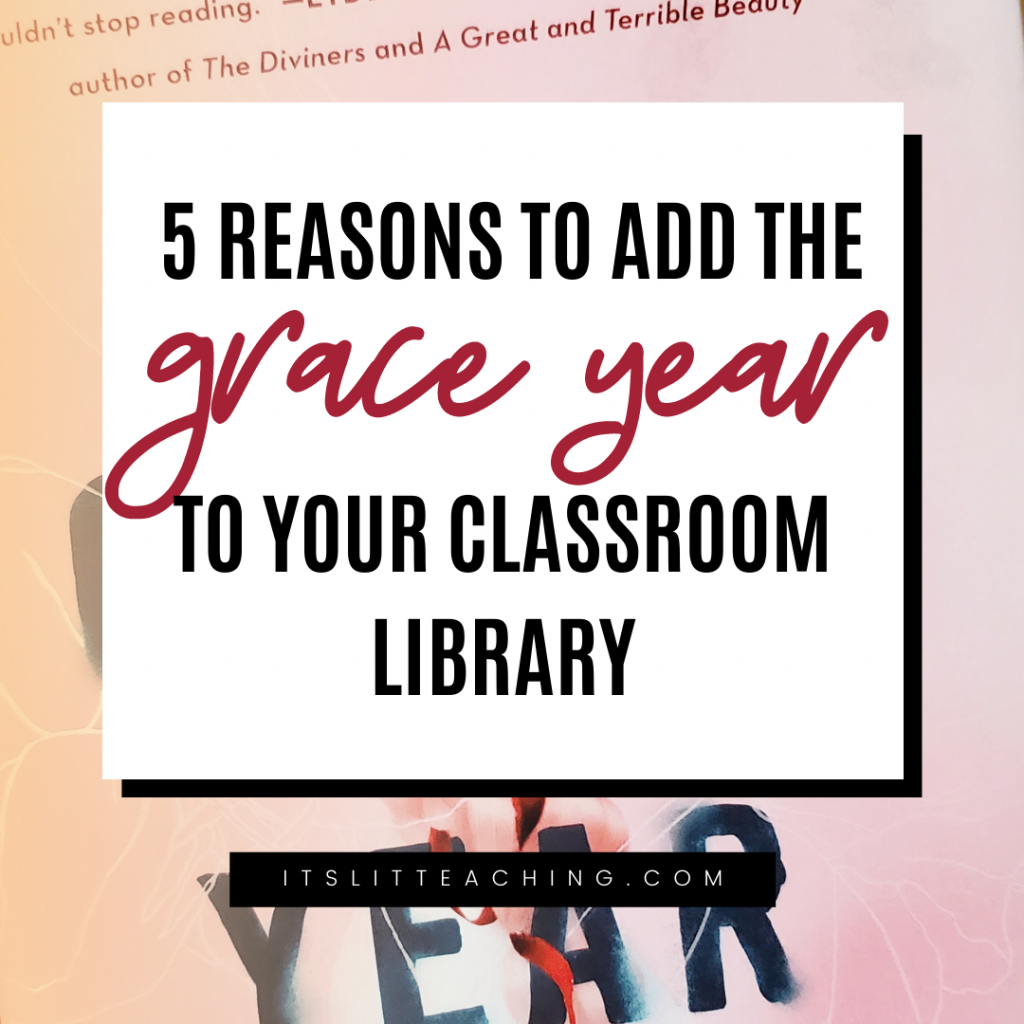 The Grace Year by Kim Liggett is a hauntingly beautiful dystopian story about female relationships, societal expectations, and rebellion that needs to be added to your classroom library.

The fine folk of Garner County know that women have magic. They have the power to bewitch men, madden other women, and disrupt civilized society. That’s why every girl has her grace year: a period where she and her cohorts are sent out to expel their magic. But it’s forbidden to talk about the grace year. So they have no way of preparing for what’s coming.

This is a book that will absolutely captivate you and your young adult students. The themes within Liggett’s tale are complex, but relevant. I urge you to put a copy of The Grade Year into your classroom library (assuming your teaching environment is not too conservative).

Disclosure: This post may contain affiliate links that earn me a small commission, at no additional cost to you. I only recommend products I personally use and love, or think my readers will find useful.

The Grace Year Is A Dark Dystopia

We know that teens love dystopian fiction. For this reason alone you should grab The Grace Year for your classroom library. Students who loved The Hunger Games will be more than ready for this one!

The Grace Year opens up with two quotes: one from The Handmaid’s Tale and one from Lord of the Flies. As you read, it becomes clear just how fitting these quotes are. In fact, the novel reads like an all-female mash-up of the two.

Garner County’s ideas about women aren’t too far off from The Handmaid’s Tale. Women are treated like property. If they don’t marry or can’t bear children, they’re worthless. The highest honor is to marry and produce a son; the lowest are cast-off to the outskirts, where they made do on nothing and serve as prostitutes to the county men.

During the grace year, the girls who have just reached a marriable age are all sent out into the wilderness together. You’d think that they’d work together to survive or even just enjoy the freedom they finally have together out in the woods.

Alas, their own beliefs about themselves, their value, and their roles in society follow them into the forest. During the grace year, the biggest threat may not be the poachers, who hunt them like prey, or the ghosts of grace year girls before them.

The biggest threat could be each other.

The Grace Year Offers A Compelling, Female Protagonist For Your Classroom Library

Tierney James, the protagonist of The Grace Year, is a main character we can all root for. She’s never been a big fan of the “behave, get married, have lots of children” script that the rest of the world seems to want for her.

Instead, she spent her adolescence breaking the rules, learning survival skills from her father, and attempting to be as unattractive as possible to men on the lookout for good wives.

Unlike the other girls, she doesn’t dream of a husband. Instead, she longs to become a laborer, so she can spend time growing plants in the fields and working with her hands under the sun.

She thought her best friend understood that. When he gets in the way of her plans, Tierney can’t help but feel betrayed.

As she goes into her grace year, she is ostracized by the other girls. Yet, she has the skills and knowledge that they’ll need to survive a year in the woods.

At no point does Tierney give up or back down. When others lose their head, she grasps even harder onto rationale and logic.

As much as The Grace Year is a novel screaming out against the patriarchy, it’s ultimately a story about female relationships.

Liggett does not shy away from how cruel girls can be to one another. At the beginning of the novel, the girls are as catty, cliquey, and mean as can be. They are overrun with fear and jealousy.

This novel encompasses the full spectrum of female relationships, from family to friends. It even touches on romantic relationships between women.

The women in Tierney’s family seem almost as cruel. Her mother constantly pushes Tierney to behave properly, while her sisters are proud of their marriages and never speak of their own grace year. Tierney doesn’t feel supported by them but instead feels that they willfully ignore her hopes and aspirations.

Throughout the novel, Tierney comes to learn that together, women can achieve great things. They can dismantle ancient patriarchal norms.

But the novel doesn’t with everyone happy and friends either. Liggett offers hope and possibility, without giving readers the turnaround in character behavior that feels fake, corny, or impossible.

While Tierney is able to earn the trust and respect of many in her community, she remains an outcast to others. While she learns to understand the love in her mother’s actions, she still must operate in an oppressive society.

The female relationships in the novel are deep and complex. Just like those in real life.

The Grace Year is Delightfully Dark

As much as this is a reason to add The Grace Year to your classroom library, it’s also the same reason you may not want to add it.

The Grace Year for everyone, but it is a deliciously dark story. And I love a good, dark tale.

Girls sent to die in the woods. Poachers wearing gray shrouds, crouched in the woods, hunting teen girls like prey. Magic. Ghosts. Even girls’ body parts are bought and sold in little jars. This book is not for the faint of heart.

For those who love a good scary story, this one just might scratch that itch. For sensitive readers, however, I don’t recommend this one.

While Liggett is never overly graphic in her descriptions, she doesn’t shy away from violence, rape, or abuse either. What happens to the women in this society is horrific, and Liggett is not afraid to show these events to readers.

Romance is Not Central to The Grace Year’s Plot

The last reason you should run to go pick up a copy of The Grace Year for your library is this: the plot does not revolve around a boy or romance.

Yes, there are marriages, but they are often unwanted, cruel, or forced.

And there is a romantic interest and some plot around that, but it is not central to the story. Tierney is brave and capable because that’s who she is. While others may rescue her from time to time, she does a fair bit of rescuing others herself.

Like I said above, The Grace Year is ultimately about female relationships, not heteronormative romantic ones. The characters grow not because they fall in love, but because they persevere through hardships.

Adding more books to our classroom library’s shelves that teach women to trust one another, to lean into one another, and to accept one another can help build a brighter future.

What our real-world grace year girls need is not another novel extolling the virtues of the perfect romance, but one that teaches them the beauty of real, solid female friendship.

Conclusion: Add The Grace Year to Your Library Today

The Grace Year offers a lot for young adult readers and your classroom library in general. Liggett’s themes around identity, societal expectations, and female friendship are relevant and important.

But it’s also just a well-told tale. It reads like a dark fairy tale, one not-yet-bleached-clean by a Disney retelling.

This is a great read to offer to the young women in your class. Just be sure that you don’t hand it off to anyone too sensitive. This one should probably come with a warning label, but that shouldn’t stop you from offering it up as a suggestion anyway.

Have students looking for other creepy dark tales? Try The Dead Girls of Hysteria Hall or Broken Things.

For another dark story with an amazingly strong female character, check out Dread Nation or Children of Blood and Bone.