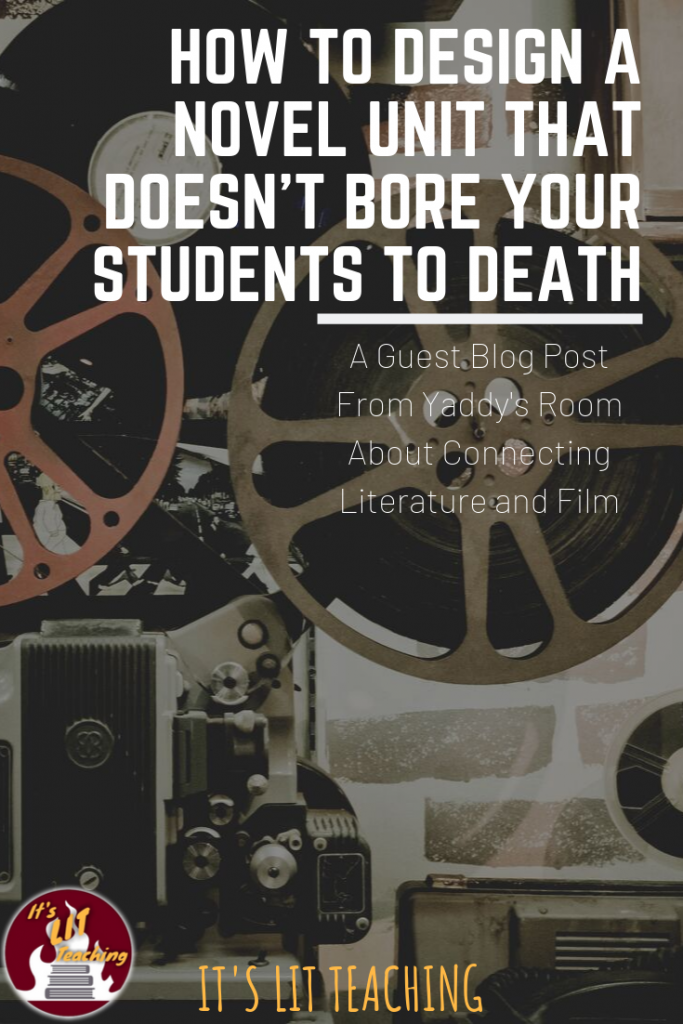 You have a boring novel unit, now what?

I know it sounds like the shiny rainbow unicorn promises made to you at mandatory afterschool professional development. It isn’t. It’s as simple as sitting the kids in front of another screen and giving them an object. So, my magic answer?

Connect a movie to it!

I started catching on to this when I started out the school year. I had to teach about identity and culture as part of the curriculum, so my first thought was to show the students a fictional culture and have them outline all the concepts we had gone over. If you know me, you know I’m a hardcore Slytherin. And the wizarding world had a bunch of amazing cultural world-building that I just had to present it to my students in a way that they could study it, and come away with a valuable lesson from it.

But for a novel? A novel was a different beast altogether. Especially a novel like Things Fall Apart, where there was no convenient Leonardo DiCaprio movie out (I’m looking at you, Romeo + Juliet).

It forced me to break this whole process down. Luckily for you, I’m going to save you the blood sweat, and hangovers, and give you my process. I know. I’m awesome.

Step 1: Break Down the Novel into Themes

This has become easy nowadays. You likely have a teacher’s edition of the novel, years of experience, or access to the internet. One of my favorite tools to use when analyzing a novel is LitCharts.com and CommonLit.com. LitCharts breaks down the novel by quotes, themes, and characters. CommonLit.com is an awesome free resource of paired readings, so you can see what texts they already paired to a novel, and what common themes are laid out. Don’t worry, I don’t get paid to advertise them. I just really think they’re amazing.

Step 2: Brainstorm What Movies are Currently Popular or Classically Popular

This is the tough part. What movies with kids love? Which ones do we have to trust they will fall in love with? Try to listen to movies they are talking about, take the temperature in your classroom, what do your students specifically like? I taught in Hawaii, so my students were obsessed with Moana.

Here are a few to start you off:

Step 3: Make a Venn Diagram, Which Ones are Similar?

Don’t actually make a Venn diagram. Or do. Whatever gets the job done. I personally like to draw things out on my whiteboard at home or use stickies. The point here is, which movies line up thematically with the novel? Which one does it the best? Of course, you can try to connect any movie with any novel, but that won’t make your novel unit interesting, it’ll just give you filler.

Step 4: Make a Plan to Use the Movie as a Learning Tool, Not Just Filler.

This is another hard part. How do you use a movie as a learning tool? With my Harry Potter example, I had students draw up a graphic organizer with values, language, clothing, economic system, and beliefs. Then they had to watch the movie and look for these specific things. When the movie ended, I provided them with a discussion question they had to answer individually, then in pairs, and then as a class: How does the fictional culture in Harry Potter help us understand culture in the real world?

But it got students talking! And I felt that spark of joy (hello, Marie Kondo) for teaching. My students were enjoying the lesson!

I personally think this standard is tough. But using this method, you nail it. Kids are learning about one topic and then seeing how another creator interprets and presents it. Then, they are forced to analyze it.

I have a love-hate relationship with Things Fall Apart. I love the story, but it’s hard for kids to get into. Which is why I showed them Avatar to go along with it. Both stories have manifest destiny going on for them, an indigenous culture being invaded by a seemingly more technologically advanced culture, and question the validity of religions and whether one culture can be better than another.

I compare Chris Sully to Nwoye, both of whom struggled in their own skin within their cultures, but flourished outside of their culture. The idea of violence as being the ultimate answer can be seen throughout both the novel and the film, which brings on amazing discussion among students. I also press the idea to students that dark things are often presented as bad and light as good, which is why at the beginning of the film when Chris Sully is unsure about life on Pandora, everything is shadows and darkness, but once he begins to love the culture the lighting in the film changes. And you can’t forget the amazing role that fire of all types play in both.

Yeah, I know, I’m a nerd. Or I can’t turn my teacher brain off. But hey, you benefit from it!

I’ve also used this process with other topics.

Case study: Ready Player One and the Environment for Informational Texts.

As part of state-mandated curriculum, I had to teach about the environment using informational texts and that one Al Gore movie and some cheesy early 2000s music videos. My issue? I didn’t like that the material seemed ancient, and not relevant to my students.

Then, I figured, why not just show them Ready Player One so that they can see the environmental impacts technology can have? It’s interesting, full of pop culture references, and a great way to bring students out of the daze of early 2000s anything.

All in all, I think that this form of teaching made the material easier to digest for my students, and helped keep them engaged with novels or any unit of study I was teaching.

And it can for you too.

Make sure to subscribe to Heather’s website for amazing book reviews and teaching strategies. And if you want more tricks, stories, and kickass teacher hacks from me, head on over to https://www.yaddysroom.com and subscribe to my newsletter for monthly freebies and overall awesome stuff.