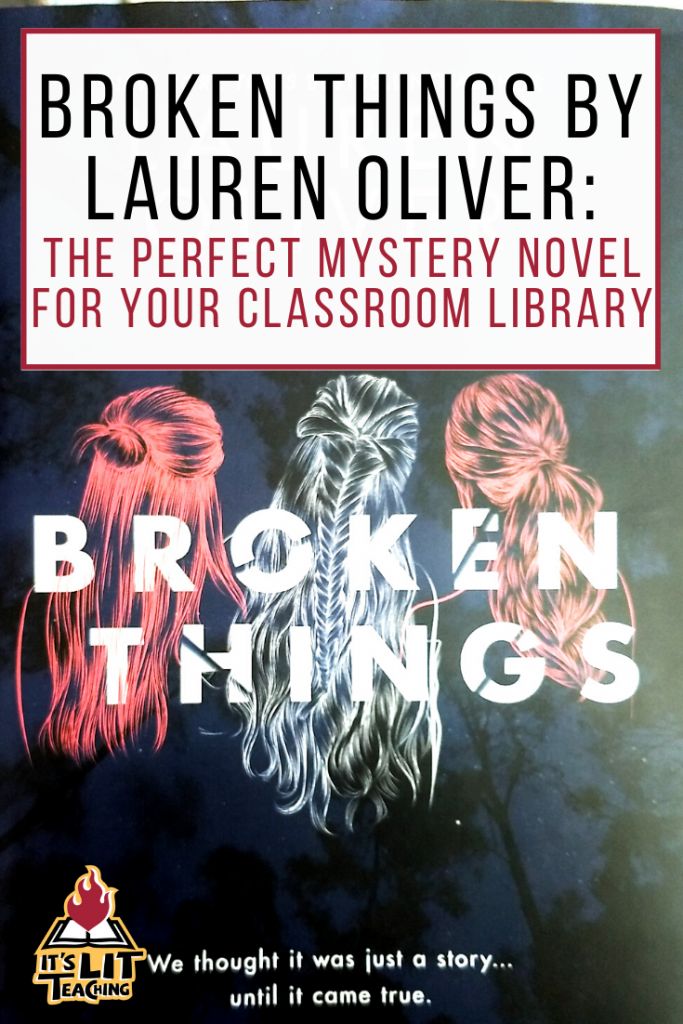 At the beginning of each semester, I talk to my students about their book preferences during the first week. I always ask my students what they like to read. Inevitably, I get the same answer over and over: drama and mystery.

It makes me want to bash my head against a wall. I mean, can you be any vaguer? I never know what to do with that request.

Well, I didn’t, until I read Broken Things by Lauren Oliver. Those two adjectives describe this example of lit literature perfectly because Broken Things brings the drama and mystery.

I originally read Broken Things while on vacation and, guys, I devoured it! I mean, I almost stayed in my hotel instead of exploring the Vegas strip because I just didn’t want to put it down!

So, keep reading this Lit Literature Review to find out why this book is so thrilling and a perfect addition to your high school classroom library (or scroll to the bottom for the quick book facts). Trust me, you’ll need a few copies of this on your shelf!

Disclosure: This post may contain affiliate links that earn me a small commission, at no additional cost to you. I only recommend products I personally use and love, or think my readers will find useful.

What drew me to Broken Things initially?

Do you remember the Slender Man murder? I live in Wisconsin where the murder took place, so maybe I was a little more invested than the average person when this happened. Basically, two twelve-year-old girls stabbed their best friend to death because they thought it would appease Slender Man–a fictional monster popularized on the internet.

Wild, right? Well, this book begins like that: two thirteen-year-old girls kill their best friend in a ritualized murder to keep themselves safe from the monster in their favorite book.

Except, they didn’t do it.

So years later, ostracized by the stigma of being the likeliest suspects (though never found guilty), these two girls try to solve their friend’s murder. Which means digging through their painful pasts and getting over the hurt and trauma of their pre-teen years.

Broken Things is dark. As soon as the story begins, you are roped in (I mean, ritualized murder?! Hell yeah). These girls’ lives have been ruined by the aftermath of the unsolved case. They’ve also lost their childhood best friend.

As young adults, they each deal with their trauma in their own way. It’s clear that they have not been able to put his behind them.

Yet, when they come together to try and figure out their pasts, there is some hope. The reader can sense the light at the end of the tunnel, even if the characters can’t.

The narration switches between the two girls, who are vastly different from one another. We slowly get a glimpse of each’s relationship to the murdered girl, who, as it turns out, isn’t as innocent as everyone thought.

I thought I had the murder figured out a couple times, but there were enough twists and turns to keep me guessing, which always makes for a delicious mystery novel.

I think there are definitely plenty of boys who would enjoy this novel, but I picture mostly girls picking up this title. A lot of the protagonists’ backstories deal with pre-teen middle school drama–the kind of stuff that I think anyone who’s ever had to deal with mean girls and feminine insecurities would relate to.

This might also be a great pick for students who enjoy horrors, but not supernatural ones. I wouldn’t call the genre horror (it’s not meant to scare the reader necessarily), but there is enough darkness in the overall tone to appeal to the same audience.

When I book talk this one, I compare the beginning to the Slender Man murder. This tactic usually perks a few ears. The length may intimidate some students who aren’t super confident in their reading abilities, but I’m so excited talking about this one that I can often get them to try it anyway.

Main Character: Mia and Brynn, now young adults, but much of the story flashes back to their pre-teen years

Need more books for your classroom library? Use the form below to subscribe to my newsletter and receive my list of must-have classroom library titles for FREE! The list includes titles like Black and White, my go-to for reluctant readers. Don’t forget out-of-the-box diverse epics like Children of Blood and Bone either!