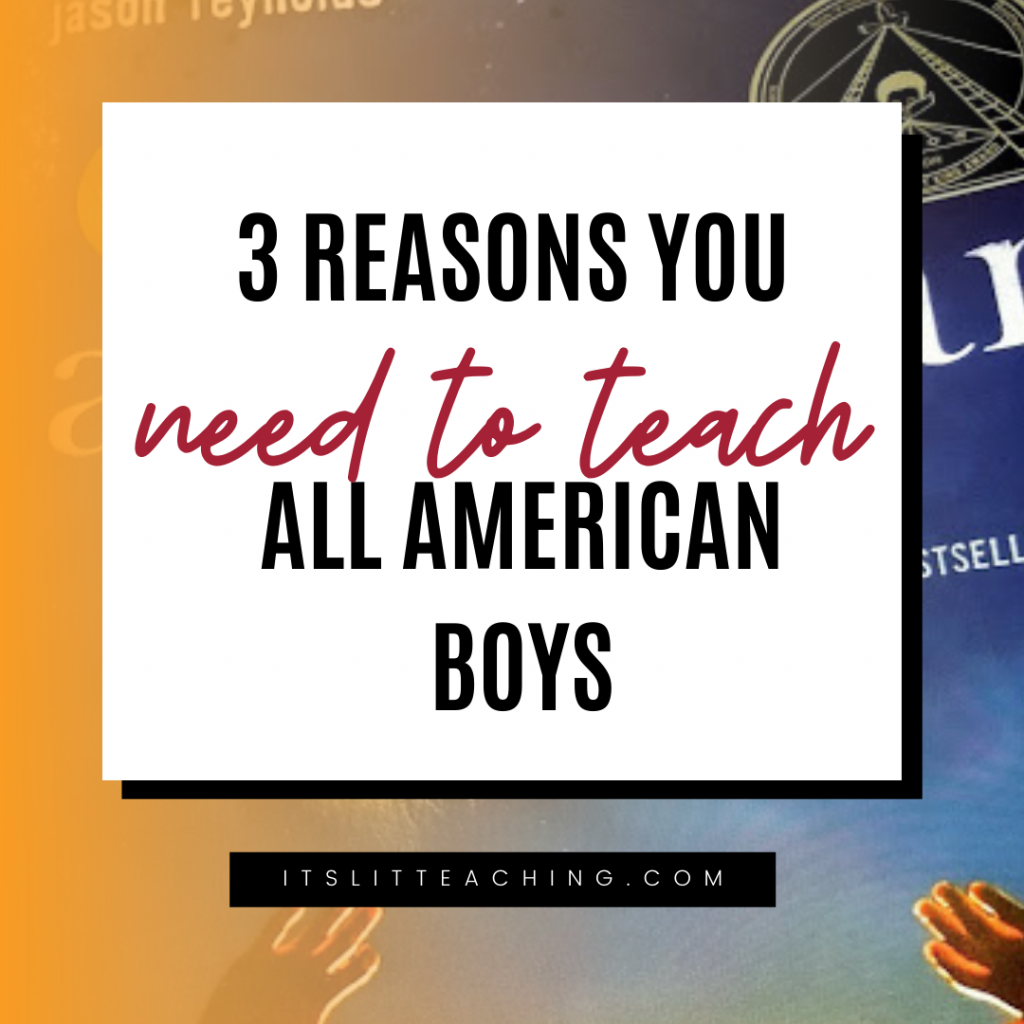 Are you ready to teach a novel that students will love? Want to discuss complex ideas with the teenagers in your classroom? All American Boys by Jason Reynolds and Brenden Kiely is a novel that will allow you to do all that and more! This book was one of the first young adult novels inspired by the #BlackLivesMatter movement and it still resonates today. While there is a multitude of reasons to incorporate it into your curriculum, this blog post will cover 3 reasons why you need to teach All American Boys.

The diverse perspectives All American Boys presents makes the novel stand out from other social justice novels. The story is told in first-person from two different characters–one white and one black.

Rashad is a black teen. He’s in the military academy. His father is a police officer. When a police officer brutally attacks him, Rashad is more confused than angry–he didn’t realize he was “that kind of black.”

Quinn, the other protagonist, witnesses Rashad’s beating. He’s a white teenager, on the basketball team, and the son of a veteran who died in combat. Even more important, he is close to the police officer who attacks Rashad.

While Rashad grapples with his own injuries, Quinn examines his own biases.

While Quinn weighs whether to side with old loyalties or examine his own privilege, Rashad has to decide whether or not to speak up about that injustice committed against him.

Neither character knows the other well–they attend the same school, but run in different circles–yet their stories nevertheless intertwine.

Connections for all Students

Even in the most diverse classroom, Quinn or Rashad’s story will resonate with someone in your class.

There are a lot of great young adult novels that discuss social justice or the Black Lives Matter movement. Very few, however, incorporate a white perspective.

Now, I fully believe that the traditional English curriculum has way too many white voices as is and that the canon needs an overhaul.

But offering a white point-of-view–for better or worse–will help to get some reluctant white students to re-think long-held beliefs.

A white voice will also go a long way in getting a book about a controversial topic approved to be taught in the first place. After all, so many amazing units about race, privilege, and social justice never see the light of day because conservative administration or parents shut it down immediately.

These diverse voices help establish the themes and deep ideas that run throughout the novel.

First, there’s the obvious issue of police brutality. An officer violently attacks Rashad Rashad while he’s shopping for a few snacks at a cornerstore. He wakes up in a hospital.

Later on in this story, Rashad’s father–another officer–describes a moment when he, assuming the worst, fired on an innocent suspect, rendering the suspect paralyzed for life.

The two instances allow for students to analyze the issue of police brutality from multiple angles. Rashad’s attacker is white, but his father is black. This shows that police brutality runs deeper than mere racism.

There is a lot that you can discuss with students here.

Then, there’s Quinn, who witnesses the event. The officer responsible for Rashad’s injuries is a close family friend of Quinn’s, a man who helped Quinn cope with his father’s death. While the officer’s family begs Quinn to testify on the officer’s behalf, Quinn knows deep down that Rashad didn’t deserve the treatment he received.

Quinn battles with how to proceed and how to reckon the two sides of his friend: the role model he grew up with and the violent man who put Rashad in the hospital.

If you’re looking to discuss social justice and the ways that students can speak out against injustice, you’ll find more than enough to talk about as well.

Rashad’s brother, Spoony, is determined to get Rashad’s story out there. Meanwhile, his peers support him in their classes.

The hashtag #RashadIsAbsentAgainToday appears mysteriously outside of school. Quinn eventually wears a t-shirt to school to show that he stands by Rashad.

And the novel ends with a powerful demonstration in support of Rashad.

Yet, my favorite lesson in this novel is the one on privilege. While racism is a theme that we see often enough in young adult books, there aren’t too many that walk readers through the process of identifying, understanding, and analyzing one’s privilege.

I love that we get to watch Quinn realize that being white has allowed him to “opt-out” of a lot of difficult conversations in his life and that he ultimately decides to no longer live in ignorance.

It’s a powerful lesson for white students, who might otherwise roll their eyes at another “racism story,” and just one more reason to teach All American Boys.

Ultimately, All American Boys is about two teenage boys trying to understand injustices in the world in which they live.

The story is told through their voices. They have teenage concerns like girls, basketball, and parties. They use slang and fib to their parents.

Rashad and Quinn are relatable. Your students will recognize them, and that gives the story extra power.

Racism. Privilege. Justice. These are not just adult themes or adult issues. Whether we like it or not, these are factors in our students’ lives too; these are themes that they ponder frequently.

All American Boys shows what it looks like for teenagers to grapple with these issues. Your students will be able to relate to Rashad and Quinn’s priorities, struggles, and hopes and dreams.

That relatability will make it so much easier for students to engage. Your students will want to talk about this novel. They’ll see themselves and their town in it.

When students are naturally engaged, without having to be baited by quiz scores or standardized tests, learning is fluid and fun.

If you’re looking for a book about social justice, the Black Lives Matter movement, police brutality, or are just desperate for something that will make your students actually pay attention in class–All American Boys is a sure bet.

In addition to the above reasons, it has some additional benefits as well.

Unlike many other novels with similar themes like The Hate U Give and Dear Martin, All American Boys is actually light on the swearing. If you want to tackle some controversy without offending parents, this is the novel with which to do it.

This novel is also not as new as other young adult novels on this topic. While the “shininess” has worn off a little bit, that’s also given educators time to create materials for the novel, making planning a little easier.

I was lucky enough to meet Brendan Kiely when he visited our school. In addition to being a wonderful and engaging speaker, he offers some teaching resources on his website.

You could also grab my All American Boys novel study bundle right here and call it day.

Regardless, be sure to have All American Boys on your classroom library shelves, if not in your curriculum!